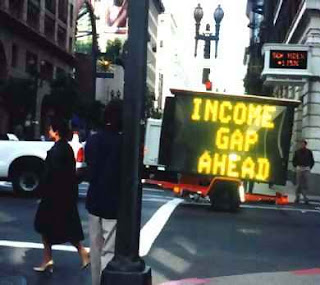 There are plenty of great reasons to tax the hell out of the super-rich; their riches have never been as super, they're not doing anything with their riches except multiplying them, and they pay a lower tax-percentage than the working and non-working classes do. But the greatest reason to tax the super-rich is jealousy.

I suspect that either jealously is an under-appreciated motivator, I'm a particularly petty and angry person, or both. Every passionate pursuit in my life exists because I believe there's somebody who's worse at it than me. I never(ever) watch sports, and think 'I could've done better!,' which is also why I don't understand their appeal. But writing, rap music, news and commentary? I figured I could do a better job than the people I see who were successful at those things, and so, be at least as successful as they are.

I was wrong, but it doesn't matter anyway, because doing a good job doesn't make any difference. The United States has the greatest level of inequality compared to any other developed country and part of the reason it continues unfettered is simple mythology. It's mythology that I used to believe. And that is- trying really hard and doing your best will make you successful. Not even make you rich- just sustain your existence.

It's easy to loathe oneself when trying really hard and doing your best only leaves you struggling- but it's not why you're struggling- you're struggling because our current system is written that way. Competence, persistence, and inventiveness don't siphon wealth in the least.

Which means, it won't surprise you to know, that The American Dream Is Nothing. I've believed in other things like Marxism and Anarchism before, just to explain that failure, or to fill the void. Yet they're all mythologies, which are used by desperate people to justify their own stagnant social and economic standing; as I've tried to do. The truth is simpler and sadder.

The rich happen to benefit from current economic policies. The super-rich make money from simply having money, and our system rewards that, allowing them to keep more of their money. This circumstance, the existence of inequality, and the possibility of upward mobility could be changed with the simple flick of a few wrists- as history has been changed before.

Or, this circumstance and the distribution of wealth could be changed by the swinging of a lot of arms or the firing of a lot of bullets or the civil disobedience of a lot of debt-serfs. It's going to change one way, or any of those others, and one thing is for certain; it doesn't need any justification or philosophy to back it up- just jealousy.

And there has never been a more just jealousy.
2 comments: 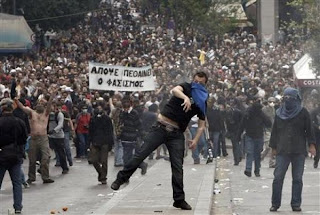 Pictured Above: Greek Citizens Respond To A 'Balanced Budget'
The Arab Spring is connected with the European anti-austerity protests, and the current largest protests in Israel's history, and the current riots in Britain. How?

Youth and College Students are always counted primarily among the crowds, who're joined with other interested parties who are against the existing power structure, And who wouldn't be? The existing power structures in all the world(except maybe Bolivia and Iceland) are an old-boys network of exploitative Jingoist old scumbags. This is first and foremost a generational war.

Another standard feature of all the social uprisings are the complaints of lack of job availability, high housing costs, and recent reductions in social welfare. I could say these things are a result of globalization, and I'd be correct, but it's more astute to say they're a result of the globalists patent disregard for the welfare of the working class in developed nations. This is a working class uprising. Clear as day. You'd have to be deaf, dumb and blind not to connect these dots, and even Hellen Keller could see Socialism was a good thing.

And so we arrive in the present day and 'criminal opportunists' are rioting and looting in Britain. Yep, out of nowhere, a bunch of youths decided to cause mayhem.(It's not like a well known drug-dealer was shot dead by police, and it's not as if riots are a common reaction to injustice in order to make the state pay. And no, it's not as if there were previous student protests and very recent anti-austerity protests; but good try.) Portraying these rioters away as simple opportunists is pretty short-sighted.

I'm sure there were plenty of opportunists on the streets of Cairo who just wanted to see what was going on. I giggled at the old media when they'd ask protesters 'what do you want instead?' You can't expect every man on the street to have a brilliant revolutionary agenda. That's not how it's going to happen these days. Modern revolution is as spontaneous as a mass text message. It's messy. If protests fail, the more you can cost the state in reputation and property damage, the more you shake the forces of old and evil. The point is to discredit and topple the existing powers. If you hem and haw about what to put in their place before doing it then you're about as useful as the stinky anarchists down at the bookstore.

Some of the Greek protesters held up signs saying 'We Are Wisconsin,' recognizing that their battle against austerity was similar to Wisconsin's battle to keep collective bargaining rights. The unrest in Israel and Britain show that this is coming to our hemisphere. We have all the same grievances and all the same tools at our disposal. Some American protests are planned for fall.

And when the time comes, Let's be Cairo.
1 comment: