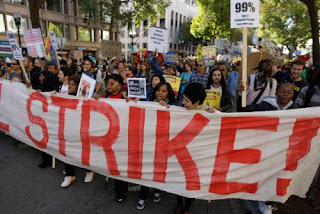 There are dynamic forces at work. If you had told me in early 2011 that there was going to be a global campaign of horizontally-organized resistance to Global Financial Powers, Government Corruption and the Fleecing of Workers called the "Occupy" movement, which was going to take off rapidly through  internet exposure, I would say it was impossible.

When the OccupyWallSt.org domain(which is not central command, just the NYC leg of the operation that kicked it off) announced a General Strike for May 1st, 2012, I laughed. I've gotta be honest. A General Strike is the most ambitious, most dangerous tactic labor has ever employed. It's also the best one at their disposal since it actually effects 1%er profits by direct action. I was skeptical of the May Day 2012 strike, however. Mostly because Occupy isn't exactly "Labor"(although it tends to collaborate with it.)

The Largest General Strike in the United States was the Great Railroad Strike of 1877. A more recent(and notorious) one was May 1968 in France. Both were largely Wildcat(non-unionized) strikes. May 1968 in France was notable for starting with students and without a focused list of demands. Occupy started with anarchists and the unemployed and largely without a focused list of demands. So actually, this call for a May Day Strike tomorrow shares more in common with the past then it may at first seem.

So what will it look like? What will it accomplish? It's hard to say. The past can be a guide but does not often dictate the future. Many have believed the media Public Relations line that Occupy was a simple anomaly occurring late last year and ending with our paramilitary boys-in-blue restoring order(albeit with a few 'incidents' of police brutality that have still gone completely unpunished.) I'm 100% sure there will be a black-out of mainstream news coverage and suspicious twitter and facebook censorship.

Every artery I have my hand on is pulsing though. It might be a nice march, a demonstration, a show which is forgotten the next day. I'm hoping for something more. I've taken the week off of work(the first paid vacation I've ever been offered-from a small business employer) to make the most of it, whatever it will be. See you in the streets.
No comments:

A Complete Guide To Race 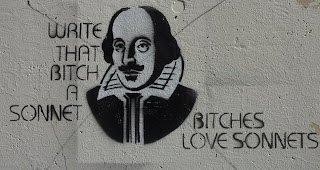 This is the worst thing I have ever read. From who I imagine the writer to be, to the comments section which is currently in an extra-national debate about the use and abuse of the word "Thug," I really hate it deep down in my heart. Not surprisingly, everyone else seems to enjoy it, or at least like it and repost it.

That's really what's going on right? Fuck me if I'm criticizing 'internet culture' presently but does anyone even read the articles anymore? Or do they, and you, and I, just look for articles/links that would reflect who we are and repost them? The headline is the key element for a repost and a like. I suspect people aren't reading the articles all the time.

"A Complete Guide to 'Hipster Racism'" is fucking PERFECT. By reposting it, everyone will know that you aren't a racist, hate 'hipsters,'(Don't worry, you're a different and unique kind of white young person, take no offense) and read lengthy thoughtful 'complete guides' to things in your freetime.

Or Do you? Because I can't conceive of reading the text of that article and, in good conscience, reposting it or even not taking the opportunity to be filled with anger and scorn for it's writer. Forgive me if I was pre-disposed to dislike it. Before I read it I read this negative review of HBO's 'Girls.' I still haven't watched the show, but It's currently making it's rounds on the internet for people to pile on with their hate and envy, which is understandable since most fellow white people are broke. This article and 'A Complete Guide' both referred to the same incident- HBO 'Girls' writer responding to criticism that the show's cast was mostly-white with the twitter post: “What really bothered me most about [the movie] Precious was that there was no representation of ME.”

Come on. That's funny. Of course, In the 'Hipster Racism' article it's cited as an example and in the negative review of 'Girls' it's described as "Vicious Racist Rhetoric." Seriously? What Planet are you people living on? People can't make jokes that express the reality that people have different skin colors? Even with no connotation or preconceptions mentioned?

I'll tell you what planet I'm living on. I just watched 12 or so episodes of 'The Boondocks' on Youtube(which is now open for unlimited television piracy, it looks like, if you're interested) and I can tell you that Racism and Race is funny. Worlds colliding, in any sense, is not something to be policed. I hate to push that old 'political correctness gone out of control' line but I feel compelled to. If we notice our personal differences, recognize cultural differences, and tell the truth about them with great jokes and art- We Win. Because we laugh together. If we write long-winded probably amphetamine-induced articles about how post-racial and hipster-hating we are, like writer Lindy West did, we look like fools.

The most petty, silly, and telling accusation of 'Hipster Racism' in the article was: "Wide-eyed acoustic covers of hip-hop songs"[by white people]. Like a show, or a cartoon, or any art: music is made to sooth people's feelings and celebrate ourselves. White Musicians aren't covering hip hop songs because they hate blacks. They're doing it because it's amusing, it makes us feel good to listen to it, and they probably respect the artists. It's not exactly performing in blackface.

But what do I know? Consult with your African American studies professor before making up your mind. 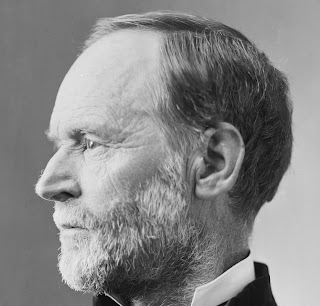 Here's what I find so baffling about people proudly flying the Confederate flag today in the south and elsewhere: You guys lost. You were the only conquerors and colonizers to be conquered and colonized  in the long history of colonization. It's the most embarrassing loss imaginable. You picked a fight with 'the north' and the federal United States, now still one of the most powerful forces in the world, when it was at it's weakest. The north was a collection of puritans, Quakers and just one serious 'terrorist'/hero(John Brown) when you picked the fight, and you were a bunch of pseudo-loyalist aristocratic snobs who by design hadn't worked a day in your life. You were ransacked and burned to the ground for your troubles. You're welcome.

Say what you want about reconstruction. At least the trains could've run on time. If I have to give the post-civil-war-era south credit where credit is due, it's for it's sustained resistance to northern/federal presence. The founding of the Ku Klux Klan(later carried on by mid-westerners,) the ever-present state resistance, and the forming of the fake-populist 'tea-party' neo-confederate political coalition are truly Awesome. That is, in the biblical sense of the term; so unbelievable they're worthy of Awe. Is that why Southerners justify flying the confederate flag today by announcing their own non-specific "spirit of rebellion" and "southern heritage"?

Your spirit of rebellion was crushed. Your southern heritage is disgusting. You are sore losers plain and simple. Instead of moving on to assimilate, learn, and contribute to The(Not "These") United States you're a constant force trying to drag down the rest of us. Back into Slavery. Back into the Dark Ages. Back into our shit-throwing Primacy. Every debt-ceiling-raising 'crisis,' every anti-womens-rights law passed; you count as a victory today. When actually you have lost so spectacularly it's ludicrous. What was once armed rebellion against the Federal government is now lobbyist-backed bickering over Gonad Politics.

Union General Tecumseh's Total War doctrine was more total than even he imagined.When I see a confederate flag, I am reminded of the military, social and cultural defeat of the confederacy.  Its stars and bars should be an oddity in a museum and an embarrassment.

Who Is The Bully? 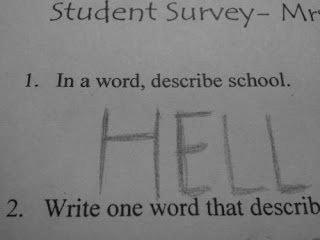 I just watched "Bully" in a movie theater in Baltimore. I expected it to be brutal. I expected it to be bleak. However it surprised me in one respect-  School administrators were displayed in a very critical light. It wasn't hard for the filmmakers. All they did is let the cameras roll, and the administrators appeared to be just as ineffective, self-important and delusional as I remember them as a child.

I felt vindicated by that. I've always hated school. School sucks. Everyone ought to remember that. But they mostly don't. Matt Groening(The Simpsons, School is Hell) and Bill Watterson(Calvin & Hobbes) are the only artists I can think of who try to represent the absurd and brutal nature of school. Most other people have some combination of selective positive memories, amnesia and self-doubt about their experience in school. When I was a kid I promised myself to never forget how much I hated school.

After I got a couple years distance from school, however, I mostly forgot about it. I figured a lot of my being a 'troubled' child probably had more to do with my personality than the nature of school itself. After all, I was just a kid, I couldn't've known shit right? As it turns out my perception of school as a child was fairly accurate. You have no choice, you have no power, you are all alone, and it lasts forever. The only thing you can do to take the edge off is make friends and interaction with them is highly policed and discouraged.

While the footage seen in "Bully" of how kids treat each other is shocking, it's also not surprising, really. Who is honestly surprised when a kid bullies another, starts using drugs, or shoots the place up? School is a jail for kids. I'm more confused about the good kids who claim to enjoy school as opposed to the bullies, bullied, or 'wierd' kids.

Bully ends with a pretty simple message: stick up for the bullied. Make friends with them. You might prevent a lot of mob abuse and maybe a suicide. That's all well and good. Though when I take it to it's logical conclusion- the entire school system is the bully. Adults quietly condone, and occasionally participate in the bullying, throughout the documentary and I'm sure the entire country. Besides that, it's 2012! Is there any compelling evidence that our public schools provide a better education than wikipedia?

Of course, a few intellectuals have championed "deschooling" and "unschooling" kids but it's largely fallen on deaf ears, because the public schools are such an entrenched part of society. If kids aren't in school then they're free to annoy their parents, burden society, and possibly play! Imagine the horror.

Better to keep them institutionalized. It's too hard to figure out what's better for them. Just like it is for our friends in prison.
No comments: