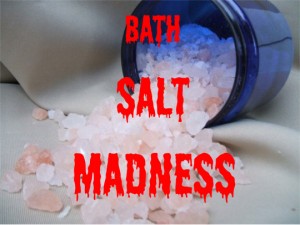 Everybody knows the Zombie Apocalypse is coming. That is to say, everyone who's extraordinarily bored with the mechanical oppression of every day life would prefer an exciting shoot-to-kill apocalyptic scenario and fantasizes about it to escape the ever-suffocating sensation of being alive. (Everybody needs an escape. More on that later.) More intellectual Zombie enthusiasts often like to discuss the actual scientific possibility of a Zombie apocalypse. They predict super viruses, biological weapons research gone wrong, or something natural and not foreseeable could trigger such events. However, with this week's horrific stories coming to light: That of a man stabbing himself and throwing his intestines at police, and that of man pinning down and eating the entire face of a homeless man, among other earlier stories- a new trigger has been identified which was right under our noses(so to speak): The War On Drugs.

Since time immemorial, after satiating the basic appetites required for survival, man has altered his consciousness. Since becoming industrialized and domesticated, some people have come to view intoxication as a bad thing, and for some good reasons. The most puritanical individual, however, would be completely intellectually bankrupt if he made the claim that certain drugs hadn't co-evolved with humanity. Alcohol, Cannabis, Opium, Tobacco, Coffee, DMT, Psilocybin...and those are just the ones I like, all have a long controversial history of human use. Besides the anthropological arguments, there's a strong case for legalizing the use of drugs from a purely political standpoint also, best summed up in this quote:

"If the words "life, liberty and the pursuit of happiness" don't include the right to experiment with your own consciousness, then the Declaration of Independence isn't worth the hemp it was written on."
-Terrence Mckenna

"Bath Salts," recently implicated in the face-eating incident and gaining more public scorn, do not have a long history of human use. Calling them Bath Salts also serves to confuse the Layman. They are experimental synthetic research stimulants created to skirt by drug laws and serve a similar effect as cocaine, methamphetamine, or methylenedioxymethamphetamine ("The Love Drug."). Unfortunately, not only are these drugs not tested, but they're physically more dangerous than prohibited drugs because they cause over-heating and delusion. Because our drug prohibition laws operate by identifying chemical structures, even if we prohibit current research stimulants, a new (possibly dangerous) drug can be made at the drop of a hat and sold legally. This is your War On Drugs. It's stupid, it kills and incarcerates countless people, and victory will never, ever be in sight.

But back to eating people. In this run of the mill corporatist media ABCNews article, the author spreads misinformation when they quote an E.R. physician talking about bath salts as saying:

"You can call it the new LSD."

LSD, while only having about 100 years of history of human use, is extraordinarily well studied. Bad Trips happen, but to date, no incidence of Face-eating has ever been documented. No jumping out of windows, either. When will this drug-war madness and misinformation end?